As a people-first home buying company that abides by its true core values, John Medina Buys Houses’ goal is to leave people better off than when they found them. 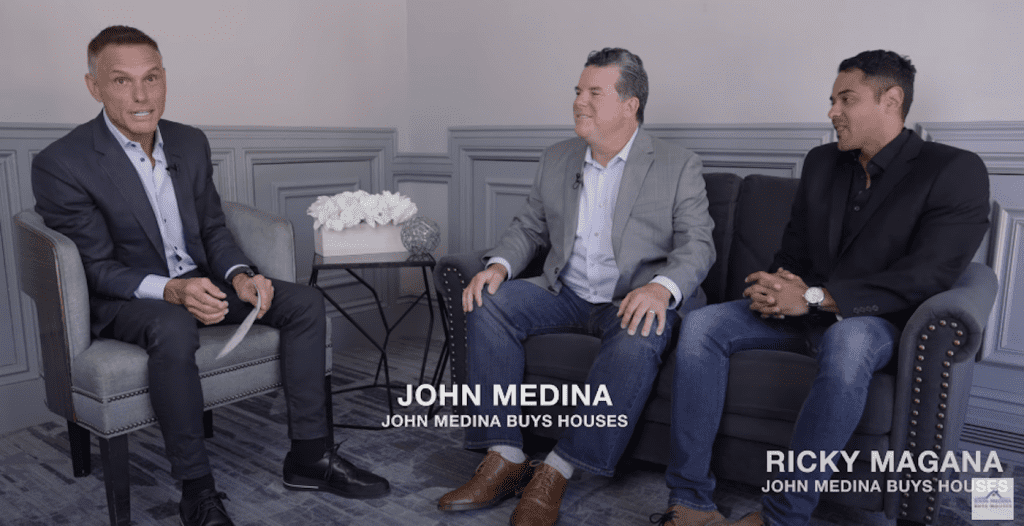 There’s a lot of companies that say they buy houses, but who’s behind it? How legitimate is it? Will the company give the home seller a real cash offer? That’s what Kevin Harrington, who’s been empowering entrepreneurs and innovative business leaders to turn dreams into reality for some forty years, wanted to find out as he sat down to talk to the Los Angeles-based John Medina Buys Houses team.

As an original “shark” on the hit TV show Shark Tank, the creator of the infomercial, pioneer of the As Seen on TV brand, and co-founding board member of the Entrepreneur’s Organization, Kevin Harrington has pushed past all the questions and excuses to repeatedly enjoy 100X success.

John Medina Buys Houses has also pushed back on all the questions over the past eight years, to also enjoy true success—as a home buying company in one of the most competitive real estate markets in the nation, Los Angeles and Orange County, California. The company’s founder, John Medina, and his team have successfully developed a real system for solving real problems that people may have when it comes to owning and selling a home. During the 11-minute interview with Harrington’s Down to Business program, John Medina inserted, “We get a lot of calls from people who are leaving California. “We get a lot of people in that way and also get people who have an elderly parent or elderly themselves who need to move to assisted living.”

“Now, let’s talk about some of the issues people run into,” said Kevin Harrington. “It’s very stressful, there’s a lot of obligations, financial requirements, you help take the burden off all those issues, right? And so, you kind of walk them through this—hand-holding process, they want to know what’s involved (when selling direct)!”

“Yes, we keep it simple,” according to John Medina. “Putting your house on the market with a realtor, there’s a lot of hoops and forms you have to deal with… we don’t deal with all that. We use a single page contract, and we bring it to a local escrow company. The escrow company is the neutral third party and they do all the paperwork. What’s so great is that bring all the paperwork to the home seller. You (the home seller) don’t even have to leave your home. It’s that simple.”

Watch the complete interview on Down to Business with Kevin Harrington.

“I know one of the major things that I love and heard is that you provide proof of funds. Meaning you show them (the home seller) that you’ve got the money to do this,” said Harrington, “Because how many people are out there trying to buy houses that don’t have money? Tons!”

“You have a big faceless corporation, with no store-front, said Ricky Magana, John Medina Buys Houses Home Buying Specialist and Realtor. “And here’s the face of the corporation right here and I think this why I think we started this whole interview with you saying I put my face on this business,” Harrington summarized. “This is why you are the success you have come to be.”

Medina’s philosophy is that his home buying company treats everyone fairly, no matter what situation people are in. He and his team stick to the company’s core values they strive to always live by and an added layer to John Medina Buys Houses’ success.

Watch the complete interview on Down to Business with Kevin Harrington.

A reputable BBB Accredited company with a ton of happy customer reviews, Home Buying Company, John Medina Buys Houses sets a different standard for selling your house. They are focused on providing homeowners with a life-changing solution and ensuring the process is simple. The team is upfront, honest, and caring. Regardless of one’s situation, they offer an easy home sale on your terms. Learn more: funky1967seller.carrot.com.

ABOUT KEVIN HARRINGTON
Kevin Harrington has been a successful entrepreneur for over 40 years. He’s an original “Shark” on the Emmy-winning TV show, Shark Tank. He is also the Inventor of the Infomercial, As Seen on TV Pioneer, Co-Founder of the Electronic Retailers Association (ERA), and Co-Founding board member of the Entrepreneurs’ Organization (EO). An original “shark” on the hit TV show Shark Tank, the creator of the infomercial, pioneer of the As Seen on TV brand, and co-founding board member of the Entrepreneur’s Organization—Kevin Harrington has pushed past all the questions and excuses to repeatedly enjoy 100X success. His legendary work behind-the-scenes of business ventures has produced well over $5 billion in global sales, the launch of more than 500 products, and the making dozens of millionaires. Twenty of his companies have each topped $100 million in revenue. Learn more: https://kevinharrington.tv.